Welcome to 2018!  Despite the expectations for 2017 being a year of above-average volatility due to the big political shift caused by the Presidential election, it didn’t happen.  As we moved into the new year, as far as stock markets were concerned, all the drama going on in the nation’s capital was more of a “tempest in a teapot” than something that made investors yank money out of their investments.  This was probably due to the fact that despite the wave of big expected changes, we actually ended up with more of a trickle, and we didn’t have any significant trade wars or other wars start either, as some people had feared.  As a result, the markets primarily focused on economic prospects both here and around the world, and that picture is still improving to the best levels it has been in several years.

A most noticeable accomplishment for the U.S. stock market in 2017 was that we saw the first year since Standard and Poor’s began their database in 1928, in which the S&P 500 was up each and every month of the year, quite an accomplishment!  Also, we had expected going into 2017 that foreign stock markets would be likely to have a good year, and they did better than the U.S. stock market, for both foreign developed and emerging market benchmarks.  Emerging Markets were very strong thanks primarily to gains of more than 50% in China and 36% in India.  Bonds however had a subpar year as they had to contend with strong economic growth and the Federal Reserve hiking interest rates three times during the year. The performance comparison for major indexes is listed below.

The Environment as We Enter 2018

So why did stocks seem to have a surprisingly good year, and did anything important change over the past year?  It seems that in the couple of years prior to 2017 we had less turmoil and uncertainty in the nightly news headlines, so what has changed?  In my opinion, it was the uptick in economic growth across the globe that began to appear late in the summer of 2016 and continues to build and remain quite robust nearly 18 months later.  This provides a good backdrop for U.S. stocks over the coming months, both here, and particularly for international stocks.

For the past several years, we have had the U.S. economy growing at a slower than normal rate of about 2%.  We have seen a modest increase in growth to about 2.5%, but that is still below the long-term average of about 3%.  What has changed however, is that that the rather erratic economic growth that we have been seeing elsewhere in the world has started to more consistently and persistently move higher.

In our recently initiated monthly podcasts, which can be found on our updated website, we have been talking about several of the key statistics that we look at in measuring the strength or weakness in these key areas.  Here are some of the most important ones

Our Favored Themes for 2018

Many of the themes that we liked as we moved into 2017 remain positive as we go into 2018.  We continue to find foreign stocks more attractive than U.S. stocks over a multi-year time frame due to their better valuations levels.  The chart below shows a picture of what we are looking at. 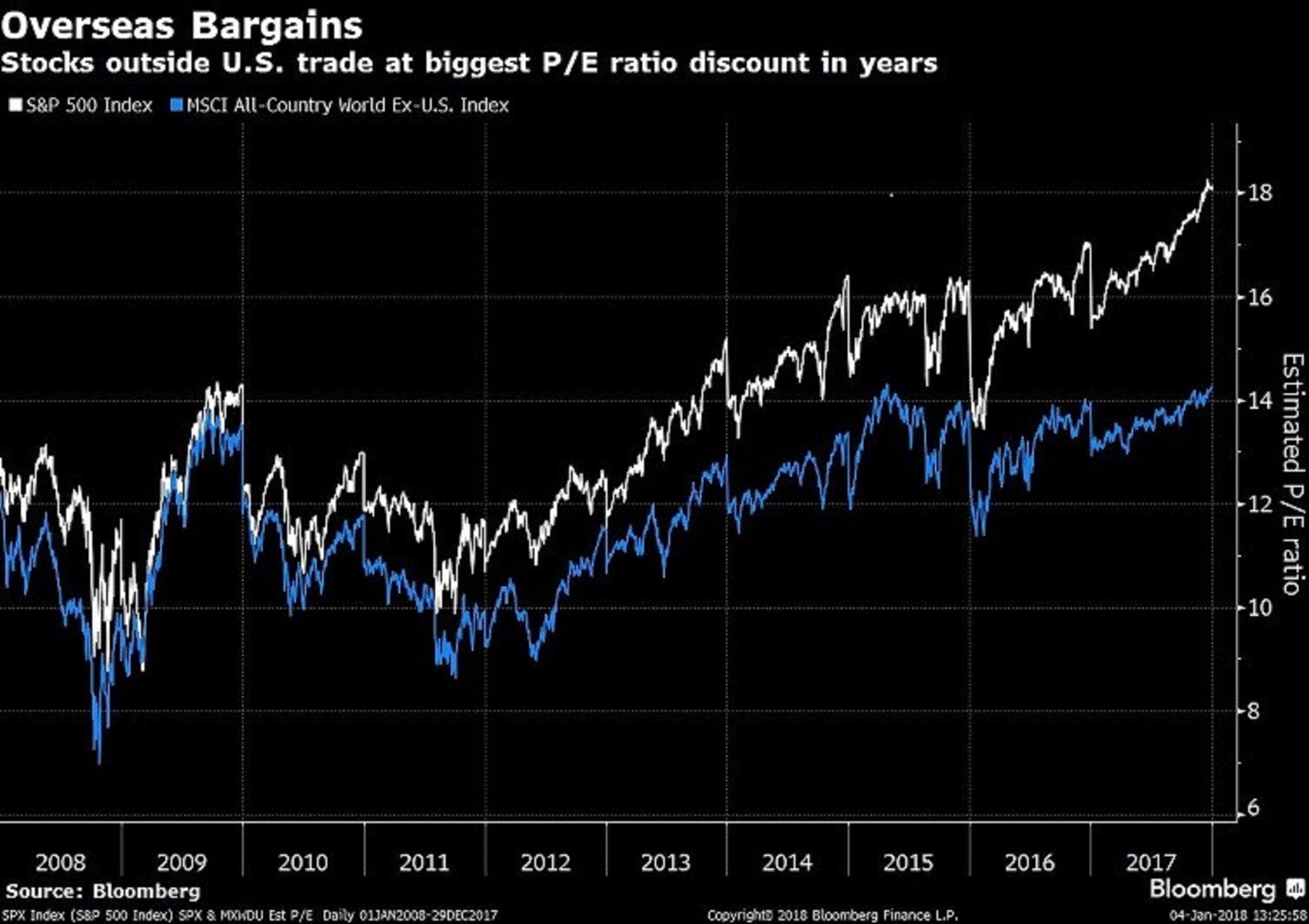 We expect that foreign stocks should continue to perform well relative to U.S. stocks, and they should now begin to get more attention from investors as they see that these investments were one of the leaders in their portfolios over the past year rather than being one of the laggards, which it has been for the past several years.

For income investors who like conservative strategies, we like strategies that can utilize both stocks and bonds rather than strategies that only hold bonds, as we feel that we are likely to have the headwinds from rising interest rates with us for the next year or two.  In addition we continue to like the energy sector, even though the underperformance in 2017 was painful.  The fact that energy stocks were generally lower while crude oil prices were up about 12% on the year does help to illustrate just how unloved this sector of the market actually is.

Our short-term Investment Models are Operating as Expected in This Environment.

About four years ago, sensing that the era of global Central Banks keeping interest rates abnormally low could continue for a longer period of time than we expected, and concerned that as a result we might see a resulting return to extreme valuation levels for stocks, similar to what we had seen in the late 1990’s, we developed a series of short-term risk management indicators and models that were designed to look primarily at internal risk factors for the stock market, and which had worked well during prior periods of high valuation.  The goal was to keep us invested in stocks longer than our traditional and more broad-based methodology would if we once again return to an environment of high stock valuations.

As we have seen stock market valuations continue to rise to some of the highest historical levels since the late 1990’s, we have been pleased with the way that these models have worked to measure risk on a short-term basis.  During 2017 the International models remained positive for the full year, and for the domestic models there was a total of only five weeks where the model was not positive.  This has helped our investment programs perform better then they traditionally would have in this type of an environment.  We believe that these models will continue to help us navigate the challenges of a high valuation environment, and should enable us to reduce exposure rapidly when the next bear market shows up.

We appreciate the opportunity to partner with you in reaching your financial goals, and we wish you a prosperous, healthy, and successful 2018!