The price of oil is falling like a rock.  Since June, oil prices have fallen more than 40% and last week the price of West Texas Intermediate (WTI) (the most popular benchmark for American oil) closed below $60 a barrel(1).  After Saudi Arabia declined to lower their oil supply at the November Organization of Petroleum Exporting Countries (OPEC) meeting speculation surrounding the reasoning behind their move began to take hold.  One theory was that the Saudi’s are attempting to flush out high cost U.S. oil producers.  More extreme theories are that the Saudi’s are colluding with the western world to further the economic pain for Russia as a result of its actions in Ukraine.  The one conclusion that can be made is that simple economics of supply and demand are taking place within the market for oil.  As a result, there is a market share war among large oil producing countries and price is at the root of the battle.

The U.S. energy boom has caused major disruptions within the global energy market composition.  As a result of what has been deemed the U.S. energy renaissance, imports of foreign oil have declined 40% from 2006 highs(1).  From the chart below, you can see that imports of OPEC oil (left axis), which is the largest supplier of foreign oil to the U.S. has significantly declined during this period.  This development has left a large void in demand for OPEC crude oil supply.  Other major oil export countries have also had to seek out replacements for their product and a lack of U.S. demand is not the only reason. 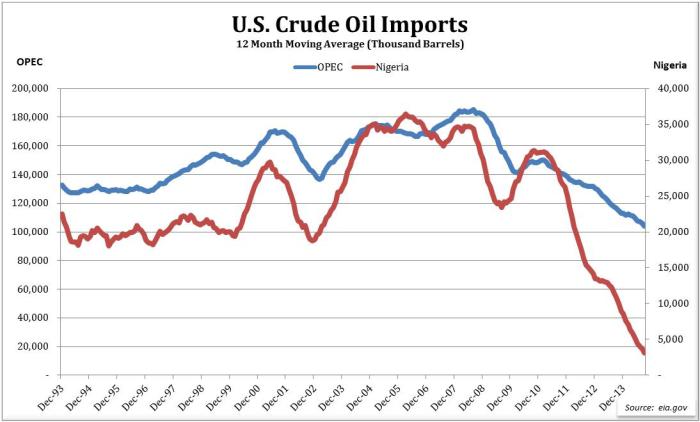 According to the U.S. Energy Information Administration (EIA), in 2013 the United States, Saudia Arabia and Russia were the three largest petroleum liquids producers. Historically, Europe has been Russia’s largest client for crude oil accounting for nearly 80% of Russia’s crude oil exports in 2012(2). As the U.S. and Europe increased sanctions on Russia for its strong arm actions in Ukraine, Russia went to the market in search of willing buyers to replace its largest client. China showed little regard for Russia’s recent actions in Ukraine or for the western world’s stance on the crisis by inking long-term blockbuster energy deals with Russia. Looking to compete with the likes of Russia, Saudi Arabia lowered its official selling price to Asia last month to the lowest level in six years(3). With Saudi Arabia lowering prices and showing no signs of cutting supply, they are exhibiting that they are well equipped to weather a period of low oil prices.

Countries that rely heavily on oil revenue as the primary driver of their economic livelihood are not as well equipped and have already started to experience challenges as the price of oil continues to fall. In recent weeks, financial markets have taken a toll on countries such as Venezuela driving down their government bond prices to 44 cents on the dollar and raising the probability of default to 93%(4). From the chart above, you can see that imports of Nigerian oil to the U.S. show a similar path to that of OPEC, albeit a more severe fall as of late. U.S. imports of Nigerian oil have fallen from over 1.3 million barrels per day in 2010 to less than 50,000 barrels per day in August of this year(1). In countries such as Nigeria where oil revenue accounts for 80% of its government revenue, civil unrest will become a legitimate concern if oil prices and demand remain low for an extended period(4).

Although the U.S. is not facing challenges such as civil unrest from low oil prices, many high cost oil producers within the U.S. are facing the challenges of turning a profit. The chart below shows the three primary oil fields that have attributed to the recent U.S. energy boom. According to Morgan Stanley research, the break-even price for a barrel of WTI crude oil is $65 for Eagle Ford, $61 for the core production area within the Bakken, and a range of $57-75 in the Permian oil field(5). According to the EIA, only 4% of U.S. shale production needs prices above $80 a barrel for producers to break-even(6). Although there is some disparity between the break-even prices of the various major U.S. oil fields, it is fair to say that many U.S. oil producers in these regions will find it difficult to achieve a profit with the price of oil below $60. 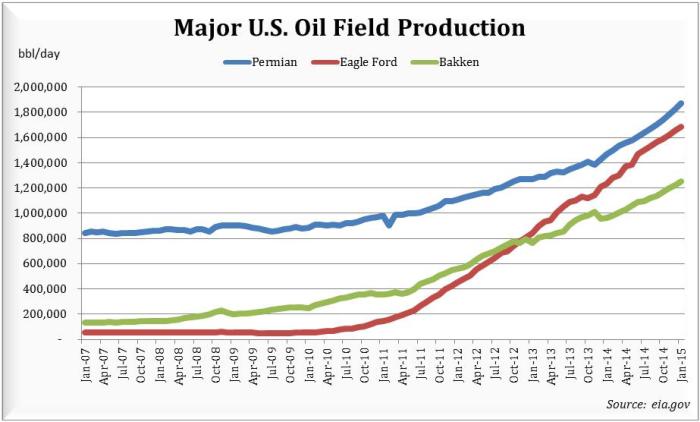 If oil prices stabilize near or below current price levels, the pain for many high cost producers and oil dependent economies may not go away. As Saudi Arabia continues to maintain its current oil supply to the market and as global growth and oil demand continue to be revised lower, projections for the price of oil in coming years remain subdued. The EIA recently released their short-term outlook for energy prices with a key highlight projection of an average crude oil price of $62.75 a barrel for 2015. This compares with an average price of $95, $98, and $94 for 2014, 2013, and 2012, respectively(1). If this level or an even lower level is maintained, investors should continue to avoid investing in oil dependent countries and various segments of the oil industry. Areas such as airlines and consumer discretionary equities will continue to benefit as long as prices remain low. We will continue to monitor developments related to the price of oil and position the portfolios accordingly.

Disclosure:  Opinions expressed are not meant to provide legal, tax, or other professional advice or recommendations. All information has been prepared solely for informational purposes, and is not an offer to buy or sell, or a solicitation of an offer to buy or sell, any securities or instrument or to participate in any particular trading strategy.  Investing involves risk, including the possible loss of principal.   All opinions and views constitute our judgment as of the date of writing and are subject to change at any time without notice.  Investors should consider the investment objectives, risks, charges and expenses of the underlying funds that make up the model portfolios carefully before investing.  The ADV Part II document should be read carefully before investing.  Please contact a licensed advisor working with Weatherstone to obtain a current copy.  If the reader has any question regarding suitability or applicability of any specific issue discussed above, he/she is encouraged to consult with their licensed investment professional.  Weatherstone Capital Management is an SEC Registered Investment Advisor with the U.S. Securities and Exchange Commission (SEC) under the Investment Advisers Act of 1940.  Weatherstone Capital Management is not affiliated with any broker/dealer, and works with several broker/dealers to distribute its products and services.  Past performance does not guarantee future results.