The last 18 months have been tough for bond investors as interest rates have remained low on short-term bonds, and they have gyrated up and down on intermediate and long-term bonds. The crosscurrents of the Federal Reserve wrapping up their bond buying program in 2014 and the expectation of short-term interest rates moving higher in 2015 (which has at times been offset by weaker global economic growth and energy prices), has caused yields on treasury bonds to drop while they have risen on corporate bonds. This is due to the perception that business risk is increasing in certain areas of the global economy. It has been a volatile time for bonds and there have been few places in which to make money. As a brief example, even legendary bond managers such as Bill Gross, dubbed the “Bond King” by the Wall Street Journal, who for many years ran the largest bond fund in the world, has been unable to make money. His new, smaller and more nimble mutual fund has dropped by 2.47% from its inception on 10/6/14 through 9/30/15 (1).

Bonds have historically been one of the better indicators of recession risk. One of the ways that this is measured is by comparing the yield of economically sensitive bonds such as high yield corporates to bonds that are not economically sensitive such as U.S. treasury bonds at comparable maturities. The chart below shows the spread between the two (higher indicates heightened risk), with the grey shaded area showing the last two recessions that we have gone through. 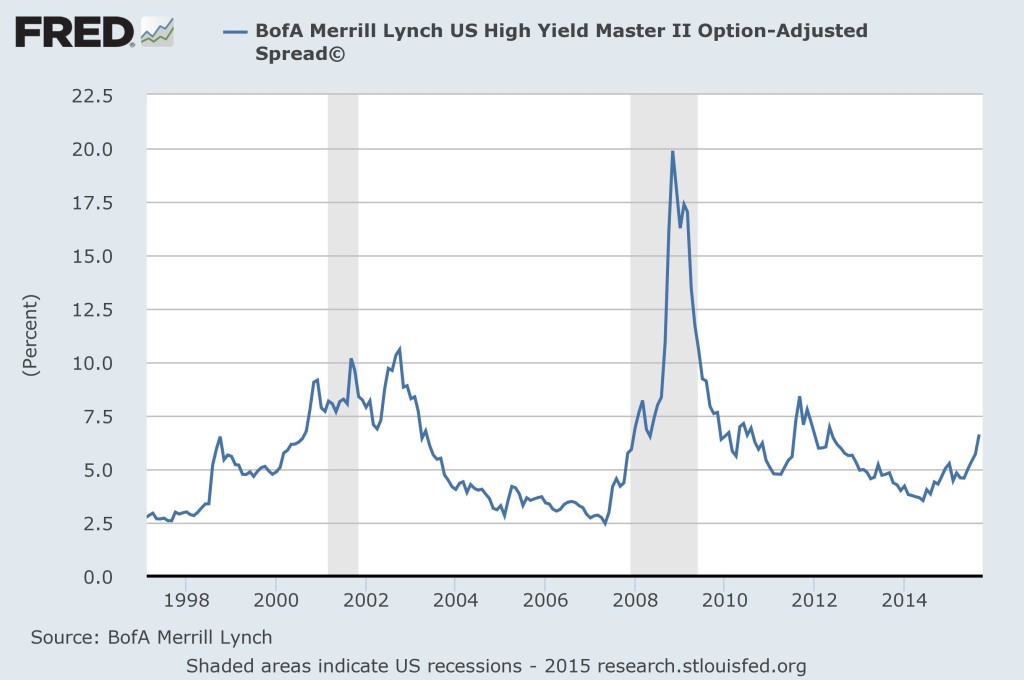 The initial rise in the spread between high yield bonds and treasuries during 2014 was influenced heavily by the weakness in oil prices weighing on the bonds of energy companies, which are the largest issuers of high yield bonds. As we moved into early 2015 and energy prices stabilized we saw spreads begin to narrow, only to widen once again as concerns over global growth began to pick up and as energy prices began to drop once again. We currently have yields spreads at the widest levels that we have seen since 2012, and significantly higher than they were in 2014. What does that tell us about the economy?

When we look at the past five periods where the yield spread has widened by 60% or more, three were shortly before or during a recession, and two were not, so that alone is not a strong indicator of a recession. In the cases where we did go into a recession, the spread widened by 60% or more, high yield bonds continued to be choppy and in two of the three cases were higher by an average of just over 10%. In the two cases where we did not have a bear market (1998 and 2011) the high yield market was higher 12 months later for both years, and by an average of nearly 9.5%. While the sample size is rather small, it is instructive that whether there was a recession or not, the one year returns were still quite strong and the significant rise in the yield spread typically had done a good job of discounting the future problems that may lie ahead for the economy.

Looking beyond the message of the bond market to see if we are likely to have a recession, we are seeing some weakness in manufacturing indexes such as the ISM Manufacturing Index, which fell to a level of 50.2 (a drop below 50 would indicate a contraction in manufacturing) and this number was the weakest since May of 2013. In addition, the Chicago Business Barometer dropped 5.7 points to 48.7 in September, Indicating business activity in the region contracted, with both production and new orders falling sharply. Several of the more national economic measures such as the Philadelphia Federal Reserve’s State Leading Indexes showed improving economic growth, so we will be watching the pockets of weakness to see if they spread.

On a global basis the economic picture remains much weaker. One significant setback in Europe is the experience of deflation in the most recent monthly inflation report after six months of inflation. Considering the fact that the European Central Bank (ECB) launched a Quantitative Easing program that was designed to purchase nearly $2 trillion of bonds in the Eurozone, this development is concerning, especially given that the head of the ECB stated that Quantitative Easing was “the last monetary tool to revive inflation.”(2) That tool does not appear to be working as well as hoped. We have also had recent statements from both the head of the World Bank and International Monetary Fund (IMF) stating that weakness in emerging markets is becoming more concerning. This increases the likelihood that the current market environment we are seeing is similar to 1998 or 2011 when the global economic situation was where the primary problems were, and they did not grow large enough to pull us into a recession. Although we are seeing some troublesome pockets of slowing, it does not appear that the United States is likely to slip into a recession in the near future based on the data that we currently have.

As we look at what the implications are for investments in income producing securities, we should expect that the Federal Reserve will increase short-term interest rates modestly higher in the near future if economic growth remains stable, but the impact will probably only by between ¼ and ½ percentage points over the next 6-9 months. This will give the Federal Reserve room to provide some modest stimulus to the economy should we have an unanticipated economic setback. The likelihood of rates moving up much beyond that in the near term will be minimal given the continued weak economic growth we are seeing from around the world, and a continued global trend of interest rate cuts rather than interest rate increases. Yields on most bond and equity income categories have already moved higher in anticipation of rising rates, and may begin to move lower if economic growth both domestically and globally looks like it will remain weak. If that is the case, then bond categories such as investment grade and equity income areas such as Utilities, REITs and energy infrastructure are priced quite attractively. High yield bonds have also reached a level where they have become quite attractive, particularly if we do not see a recession in the United States. We anticipate that the next 12 months will be more positive for bond investments than the past 12 months have been.