Is The Currency Crisis of 1997 Coming Back?

Is The Currency Crisis of 1997 Coming Back?

Many of you may remember the Asian financial crisis from the late 1990’s, that caused global currency challenges and affected markets worldwide.  While US markets recovered nicely from the crisis, the concern over U.S. export demand was significant, as currencies around the globe weakened.  We are again seeing weakness in emerging markets and continued dollar strength, so the question begs, “Are we set for another currency crisis”?

After the 1997 Asian financial crisis, many countries decided to build their foreign exchange reserves to cushion future exchange rate volatilities. Since that time, emerging market foreign reserves have accumulated through trade surpluses and foreign capital inflows. However, this year the rising trend seems to have reversed and some investors are beginning to worry that this could lead to a currency crisis similar to that of 1997.

In 2015, China’s economic slowdown, as well as its surprise devaluation of RMB in August, has led to more than $500 billion in capital flight[i].  Falling demand, in China, has resulted in declining exports from countries such as Brazil and Indonesia. The decline in energy prices have also contributed to a decline in foreign reserves, as oil exporters including Saudi Arabia and Russia have received significantly less capital inflow. Foreign exchange reserves in most emerging countries have been shrinking for the past year as shown in Chart 1 below. 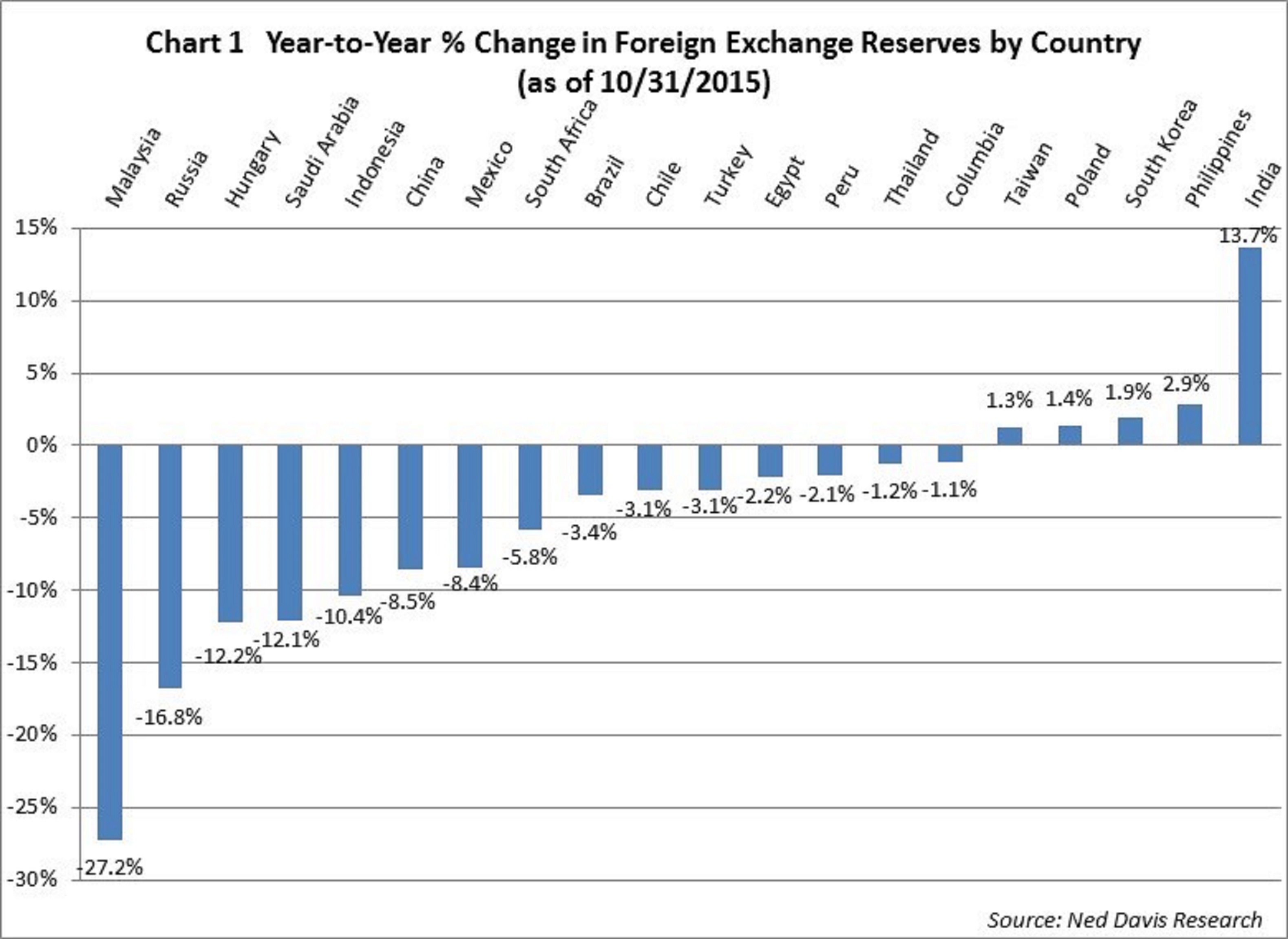 Similar situations took place in 1997 when foreign exchange reserves in Asian countries declined quickly and were eventually depleted after the sudden devaluation of Asian currencies and massive capital flight. So, should we worry about another currency crisis in emerging markets now? Well, most economists believe that the repetition of the 1997 turmoil is unlikely. After all, things have changed greatly since then.

Prior to 1997, most Asian countries were pegging their currencies to the U.S. dollar. If a currency pegged to dollar is overvalued, the central bank will need to use its foreign reserves to buy domestic currencies and maintain the peg. If the foreign reserves have been depleted, the central bank will have to give up on the peg and the value of the domestic currency will plummet. This is precisely what happened to Thailand in 1997. Currency speculators believed the baht was significantly overvalued, so they increased the supply of baht in the foreign exchange market to pressure the baht’s devaluation. After exhausting its foreign reserves to support the baht’s price, the Thai government abandoned the dollar peg and the baht lost more than 50% of its value against the dollar. The Baht’s devaluation rippled across Southeast Asian as foreign investors withdrew their capital and it soon evolved into the 1997 Asian financial crisis.

According to International Monetary Fund, only 26% of emerging market countries operated in a floating exchange rate regime in 1997. Now the percentage has increased to 50% with another 31% operating a soft peg[i].  A floating exchange rate is determined by supply and demand, and thus has a self-correcting mechanism that can absorb external shocks. In addition, a floating exchange rate can adjust balance of payments. If a country has more imports than exports and hence has a current account deficit, the demand of the foreign currency will increase and the domestic currency will devaluate, which will encourage exports to reduce the deficit and build up foreign reserves.

In the 1990s, due to rapid Asian economic growth, there was an investment boom in Southeast Asia financed mostly with borrowed foreign capital.  Since most Asian currencies were pegged to the U.S. dollar at that time, those counties seemed to benefit from borrowing in dollars with a lower interest rate compared to domestic currencies. However, Asian countries failed to maintain the dollar peg in 1997. As Asian currencies dropped significantly against the dollar, the domestic currency value of dollar denominated debts soared, leading to large scale default on debt service payments. 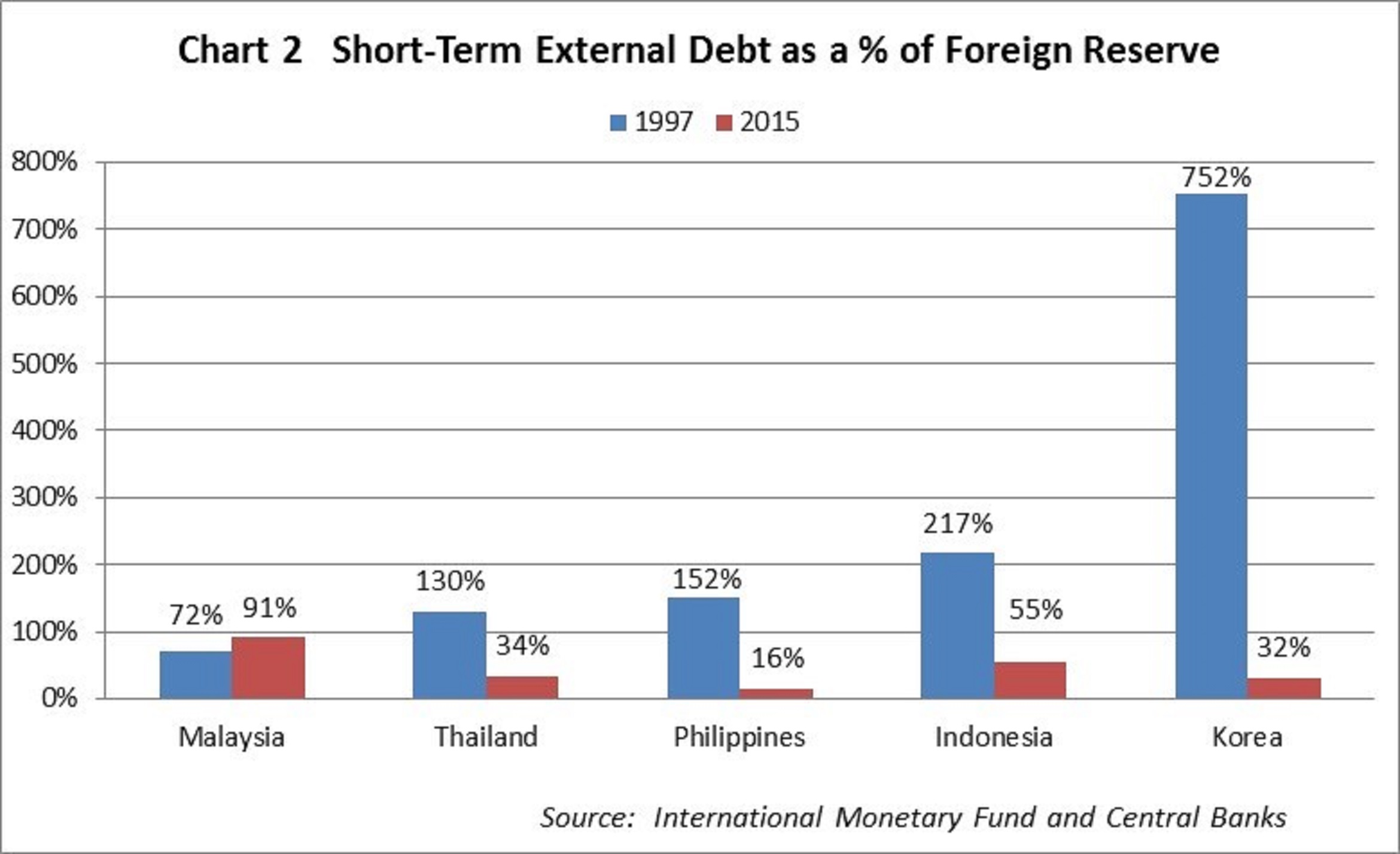 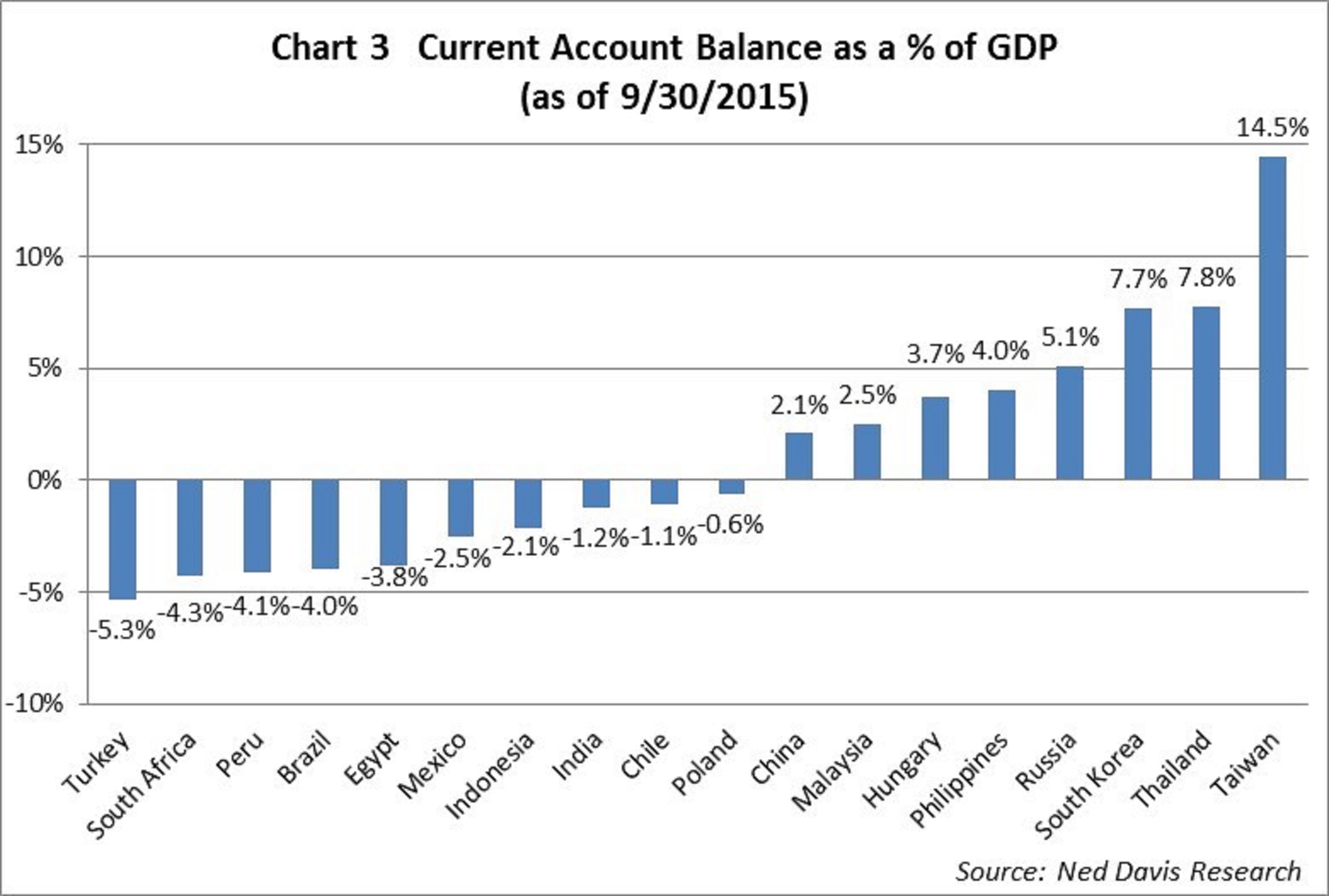 We can see significant progress regarding how emerging countries are handling their currency policy since the late 1990s.  With Fed policy changing from near zero short term interest rates and a rising interest rate environment for the first time since 2006, additional currency headwinds for these emerging market countries are likely. There is certainly more risk in non-Asian emerging markets, but the dramatic changes in policy over the last seventeen years leave little chance of a global currency crisis on the scale seen in 1997.