The second quarter was marked by a strong rebound in equity and fixed income markets, which helped bring major indexes back significantly from their lows, yet still down for the year.  Concerns over a worst-case scenario for Coronavirus diminished, as global financial markets were encouraged by the significant amount of stimulus from Governments and Central Banks around the world.  While the Coronavirus risks remain high, particularly with the number of cases reaching new all-time highs in the U.S., the lethality of the virus appears to be decreasing as both the number and percentage of people passing away from the virus is declining, which is encouraging news.  While financial markets and many economic readings look much better than they did at the end of the first quarter, the road to get the economy back to pre-Coronavirus levels has quite a way to go.

When we start looking beyond the current impact of Coronavirus, there are two factors that are going to have a significant impact over a longer-term time frame: the interest rate policy of the Federal Reserve in the coming years, and the impact of current valuation levels on expected future returns for stocks.

During the Global Financial Crisis of 2008-2009, interest rates were cut to nearly zero, and were very slow to return back to more historically normal levels, as shown on the chart below.

Over the past few months, the Federal Reserve has once again aggressively cut interest rates in order to minimize the economic impact of the recession that is being caused by the Coronavirus lockdowns.  Interest rates are once again very low on both an absolute level as well as relative to inflation.  Very importantly, in a summary of the minutes of the most recent Federal Reserve’s policy meeting in June, it was noted that policymakers “generally indicated support” for tying rate-setting policy to specific economic outcomes, with “A number” favoring a promise to leave interest rates low until inflation meets or even exceeds the Fed’s 2% goal.

The 2% inflation goal has been a target of the Federal Reserve for quite some time.  And as seen in the chart below, the 2% inflation target has been difficult to reach.  As a result, we may see a prolonged period of low interest rates in measures that the Federal Reserve can control, such as short-term government bonds, and this will also have a spillover into bank certificates of deposit, and short-term bond investments of almost all types.  While this will be good for borrowers, such as homeowners looking to refinance their mortgage, it will have a negative impact on savers as it becomes increasingly difficult to outpace inflation. 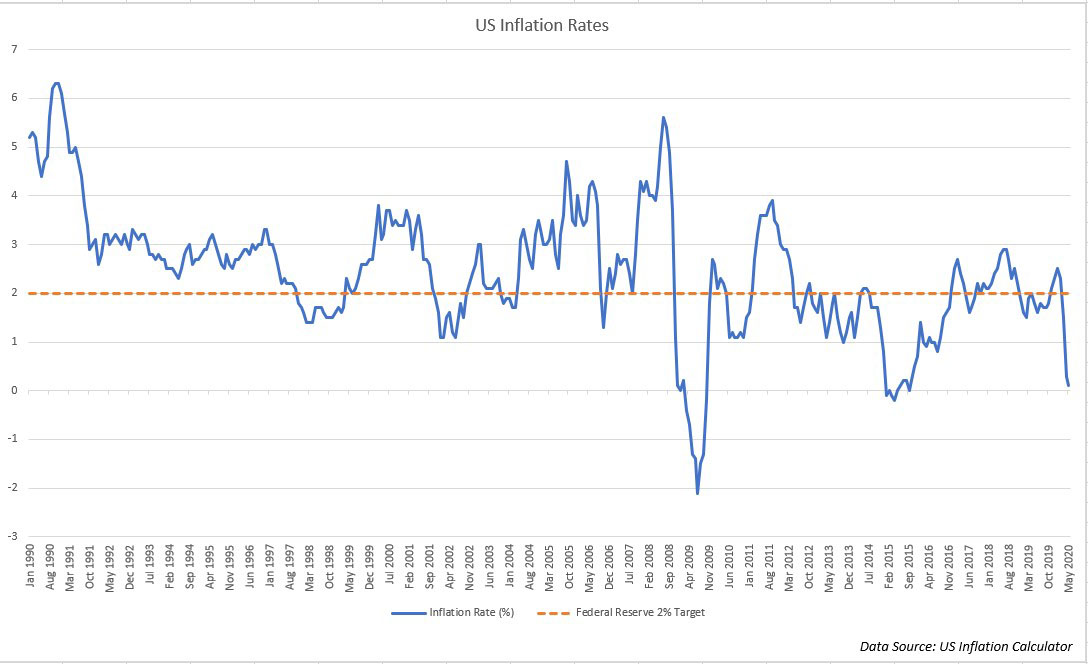 In the next year or two, this will provide a tailwind and the potential for above-average returns from income asset classes that have dropped in value due to the recent economic downturn, and which have above-average yields relative to short-term government set interest rates.  However, if economic stability returns over the coming months and quarters, the ability to find strong income producing asset classes is going to become increasingly difficult in 3-4 years if inflation has not moved above 2%, and the Federal Reserve has not begun increasing interest rates.

If we move into such an environment, there are going to be two primary paths for income investors.  The first is to live with lower income from that portion of the investment portfolio, which is not an appealing alternative to most investors.  The second path is to utilize income-oriented asset classes that have historically provided above average amounts of income such as high yield corporate and municipal bonds, preferred stocks, convertible and emerging market bonds.  These asset classes can help to provide the potential for higher income, but they do carry different types of risks, and typically need more risk management than you would need in government bond investments.  This is a topic which we will plan to discuss in future commentaries, but the bottom line is that income generation is going to become more difficult in the future.

In regard to the stock market, in the short-term there are a variety of factors that drive returns, but few that have enough reliability and predictability to be easily traded upon.  When looking out over the long-term however, valuation and investor allocations have been shown to have a strong predictability and reliability over time.  Looking at valuation data developed by Dr. Robert Shiller, which can go back as far as 1881, we can see the impact of starting valuations and stock market returns over the following seven years as shown in the table below. 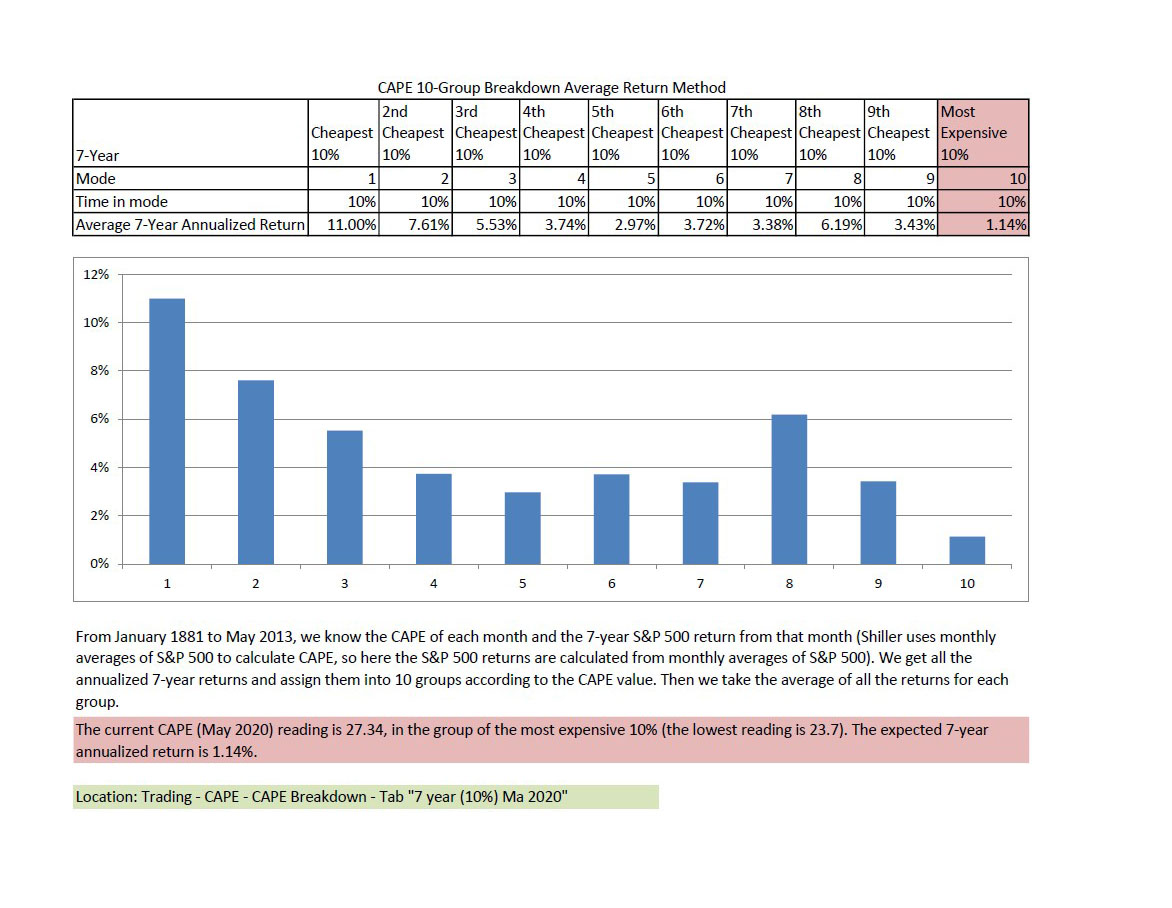 There is a general trend to lower returns as valuation becomes more expensive, although it is not a purely linear decline.  The highlighted section above shows the most expensive 10% is where we currently are in the market, and frankly where we have spent several of the past few years.  This decile has historically provided the lowest average returns compared to the other deciles, and it is a warning that we should proceed with above-average caution because we are paying a pretty steep premium for stocks compared to the past 100+ years.

The biggest risk to the stock market when at these extended valuation levels is that declines in the stock market will frequently be larger than normal when significant problems do arise.  We saw such declines after the oil embargos of 1973-74, the bursting of the internet bubble in 2000, and in the bursting of the housing bubble in 2006-2009.  This year has been a candidate for a similar type of decline given the abrupt and steep decline in economic activity, but the extensive amount of government stimulus, combined with aggressive interest rate cuts and bond buying programs by the Federal Reserve have been able to bring the market back from a potentially similar fate, so far.  However, with the Coronavirus still with us and having a big impact, we will need to continue to watch the market reactions closely because risks remain well above-average.

It is also important to note that while valuations remain high for U.S. stocks there are some other areas of opportunity when you consider that valuations for stocks remain quite a bit lower outside of the U.S.  Furthermore, there may be a structural change in valuations for the technology sector of U.S. stocks due to the number of leading global technology companies that are based in the United States.  With technology being a generally stable sector of the market with above-average growth rates, it may be able to justify premium valuations for an extended period of time.

In summary, 2020 has been, and will likely continue to be a very challenging environment for investors during the remainder of the year as we will have the ramifications of the upcoming election season yet to impact markets.  Despite the volatility driven by current events, it will remain important to keep an eye on the factors that are very useful in shaping the long-term returns experience by the financial markets.

The opinions expressed are current at the time of publication and subject to change without notice. The manager’s views are subject to change at any time based upon market and other conditions, and no forecast can be guaranteed. This material does not take into account any investor’s particular investment objectives, strategies, tax status, or investment horizon. Information contained in the commentary has been obtained from sources that we believe to be reliable, but its accuracy and completeness are not guaranteed.  Past performance does not guarantee future results.