The Economy, Impeachment, and Windows of Opportunity

There have been a number of interesting developments within the financial markets over the past few months, and despite an uptick in news events that have generally caused uncertainty to grow, U.S. stocks and bonds both saw modest gains despite a choppy 3rd quarter, while foreign markets were lower. The three things that I would like to touch base on in this newsletter are updates on what our team sees going on in the global and domestic economy, the potential impact of a presidential impeachment, and thoughts on where there are likely to be potentially positive windows of opportunity over the next year or two.

Over the past several months, financial markets have continued to be heavily impacted by both trade related news and economic data, as they have over the past 12-18 months, and the mixed message from this data is becoming increasingly correlated to directions of the various financial markets. In the U.S., weak economic reports related to manufacturing are being increasingly offset by strength in other areas such as housing and employment. As a result, the Economic Surprise Index for the U.S. turned positive for the first time in many months, as shown in the chart below. 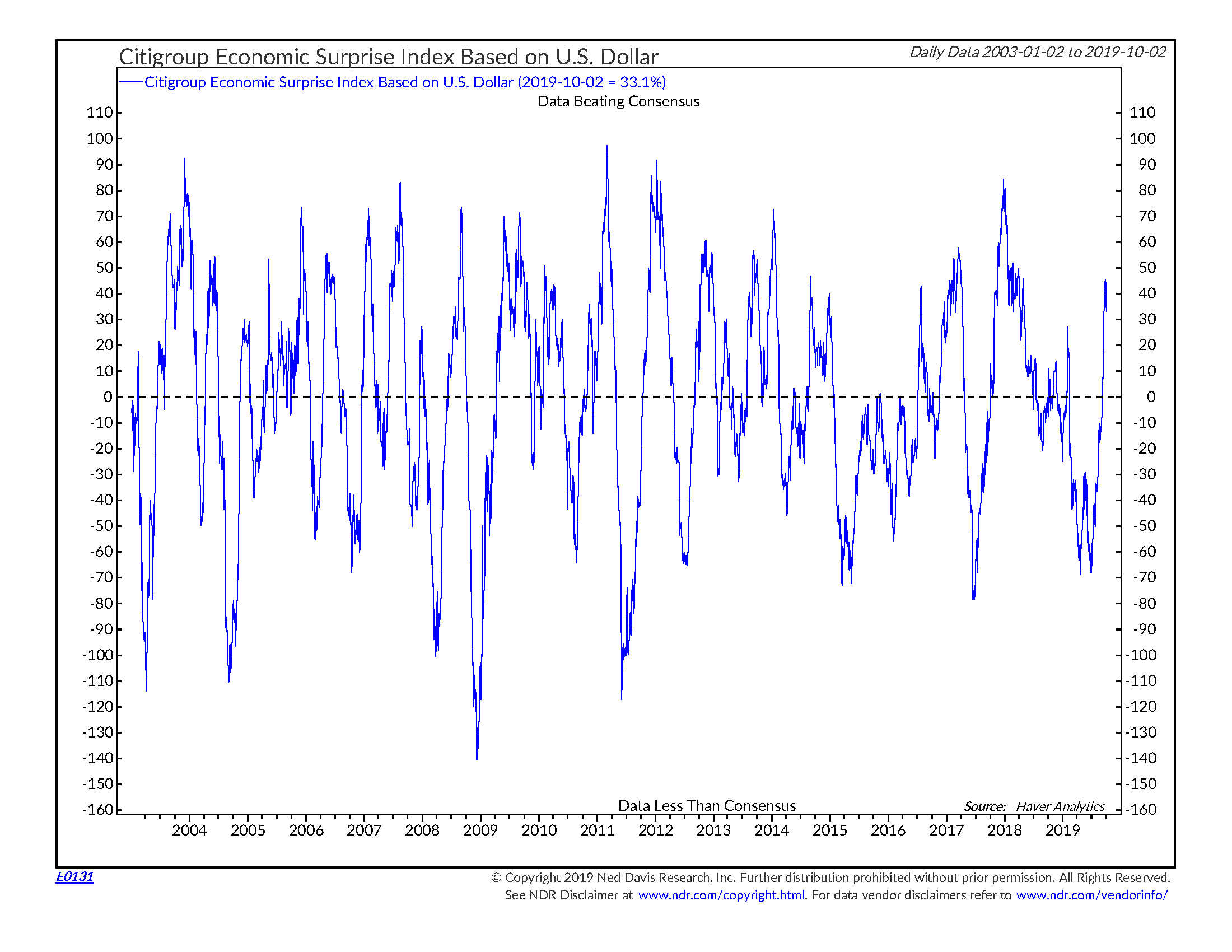 Looking outside the U.S., economic data generally remains weak, and the Global Recession Probability Model our team closely monitor remains in a high-risk zone. Recent readings from the Organization for Economic Cooperation and Development’s (OECD), Composite Leading Indicator returned the weakest reading of the global economy since the end of the Great Recession in 2009. This is also notable due to the number of countries with leading indicators in expansion territory, dropping to only 8% of the total, the smallest percentage in approximately 10 years. Economic weakness has been particularly pronounced in Europe, where the most recently published Purchasing Manufactures Index was the weakest since October 2012, and continues to remain extreme contraction territory. 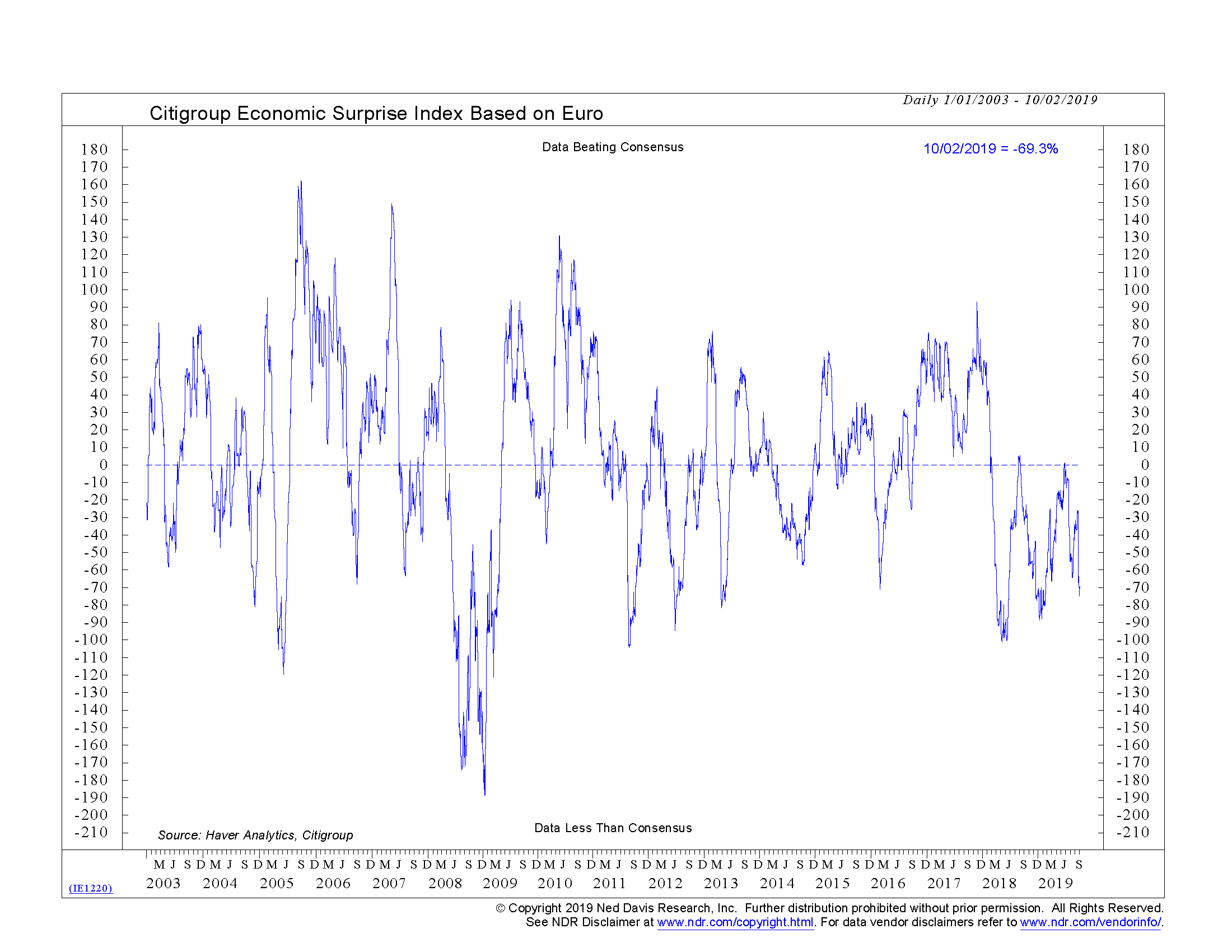 The U.S. economy has been working to avoid an economic slowdown that is impacting most of the global economy. While there are some signs of stabilization, if the global economic picture continues to erode, it is unlikely the U.S. could avoid slipping into a recession.

With a presidential impeachment inquiry now underway, the question that is frequently heard is, “Do we have any idea how the (financial) markets will react to the threat of Trump’s impeachment?” With history as a guide, the short answer is, “We don’t know.” In the modern era, there are only two cases as a basis for comparison: Presidents Nixon and Clinton. In one case markets dropped, and in the other case markets rose. Of course, each occurred under different circumstances, the 1970’s economy was generally weak, while the 1990’s economy was quite strong, making it difficult to draw any sort of conclusion except that there was in increase in day-to-day volatility during the impeachment. Historically speaking, one other take away could be that the impact of scandal and impeachment on the financial markets might very well be negligible.

Scandals don’t seem to have a long-term impact on financial markets. Despite President Trump being accused of several scandals, the markets have been positive since he took office, similar to how they were performing during the Whitewater and Lewinsky scandals President Clinton was faced with.  If the U.S. does slip into a recession, it will most likely not be due to the threat of Presidential impeachment, but rather from growing economic weakness, ongoing global trade wars, saber-rattling throughout the Middle East, or a number of other factors.

To keep things in perspective, the economy has continued to function during the transition of one President to another, whether it is through an election, a resignation, or unfortunately, an assassination.  The economy and stock market performance does not usually operate based on who occupies the White House.

So, the question then becomes, “With this mixed economic backdrop, are there areas of opportunity for investments to do well?” I believe that there are, but generally speaking, these may be shorter-term “windows of opportunity,” rather than long-term, multi-year themes. Segments where we see the most opportunity are as follows:

Income sectors that can benefit from sustained yield compression – As interest rates around the world are once again on the decline, and the increasing likelihood that rates will stay low for an extended period of time, there will be a large contingent of income-oriented investors that will be searching for ways to replace income that may be drying up from traditional sources, such as government bonds, corporate bonds, and certificates of deposit (CDs). As a result, there is likely to be renewed interest in non-traditional income assets, such as utility stocks, preferred stocks, convertible bonds, REITs, energy infrastructure stocks, and other similar asset classes. Each of these asset classes provides above-average yield, with a higher level of risk than bonds. These asset classes may be able to perform better than the broad-based stock market if economic conditions remain challenging while yields remain low. We have been allocating to these asset classes over the past year, and will likely continue to do so in the future.

U.S. stocks, assuming economic data remains stable or begins to improve – U.S. stocks have been trapped in a trading range for nearly two years, as the dual impact of trade skirmishes and the slowing global economy continue to weigh on performance. Over the past year, investor pessimism has been growing, and money has been flowing out of stocks and into bonds. If there is a reversal in the global economic slowdown, or a breakthrough in the stalemate in trade talks with China, this could be the catalyst for a positive, intermediate-term rally in stocks, and possibly a longer-term advance. While U.S. stocks are expensive on a longer-term basis, which has been a challenge, we expect that there may be some positive trading opportunities over the next few quarters.

In summary, most of the economic and political headlines over the past several months have not been very positive, but the U.S. economy, while not immune to the global weakness, has been fairly resilient.  Although a presidential impeachment makes for significant headline news, it does not appear to have a large impact on the stock market, except to create increased short-term volatility, based on the prior two cases that have presented themselves over the past 50 years. As we enter the 4th quarter of the year, there may be potential for a sizeable stock market rally if a breakthrough in either the trade talks occurs, or an improvement in global growth makes an appearance. If either of these scenarios do not play out, the same type of a trading environment that has been present over the past year could continue.

The opinions expressed are current at the time of publication and subject to change without notice. The manager’s views are subject to change at any time based upon market and other conditions, and no forecast can be guaranteed. This material does not take into account any investor’s particular investment objectives, strategies, tax status, or investment horizon. Information contained in the commentary has been obtained from sources that we believe to be reliable, but its accuracy and completeness are not guaranteed. This material should not be considered investment advice or a recommendation of any particular security, strategy or investment product.