As we wrap up 2019 and move into 2020, both the economic and trade outlooks appear more positive than when the year started. As 2019 began, the global economy had been weakening for more than six months, which continued to gain momentum and grow deeper. Trade tensions with China had been escalating, and both the U.S. and China were raising tariffs, along with the seemingly never-ending saga of BREXIT negotiations between the U.K. and the European Union still unable to reach an agreement. As some of these problems began to resolve, global stock and bond markets benefited, with almost every asset class posting positive performance for the year-a complete turn of events from 2018, when almost all asset classes returned negative performance.

Heading into 2020, global economic weakness is still prevalent, but things have improved, generally speaking. As seen in the chart below, the Global Purchasing Managers Index for Manufacturing (PMI), which began trending lower in early 2018, moved from a slowing growth reading, to a full-scale contraction reading of below 50 in early 2019, and then bottomed out at the end of July. Historically, the manufacturing PMI index hit its lowest point approximately five months before the global economy begins to move higher. 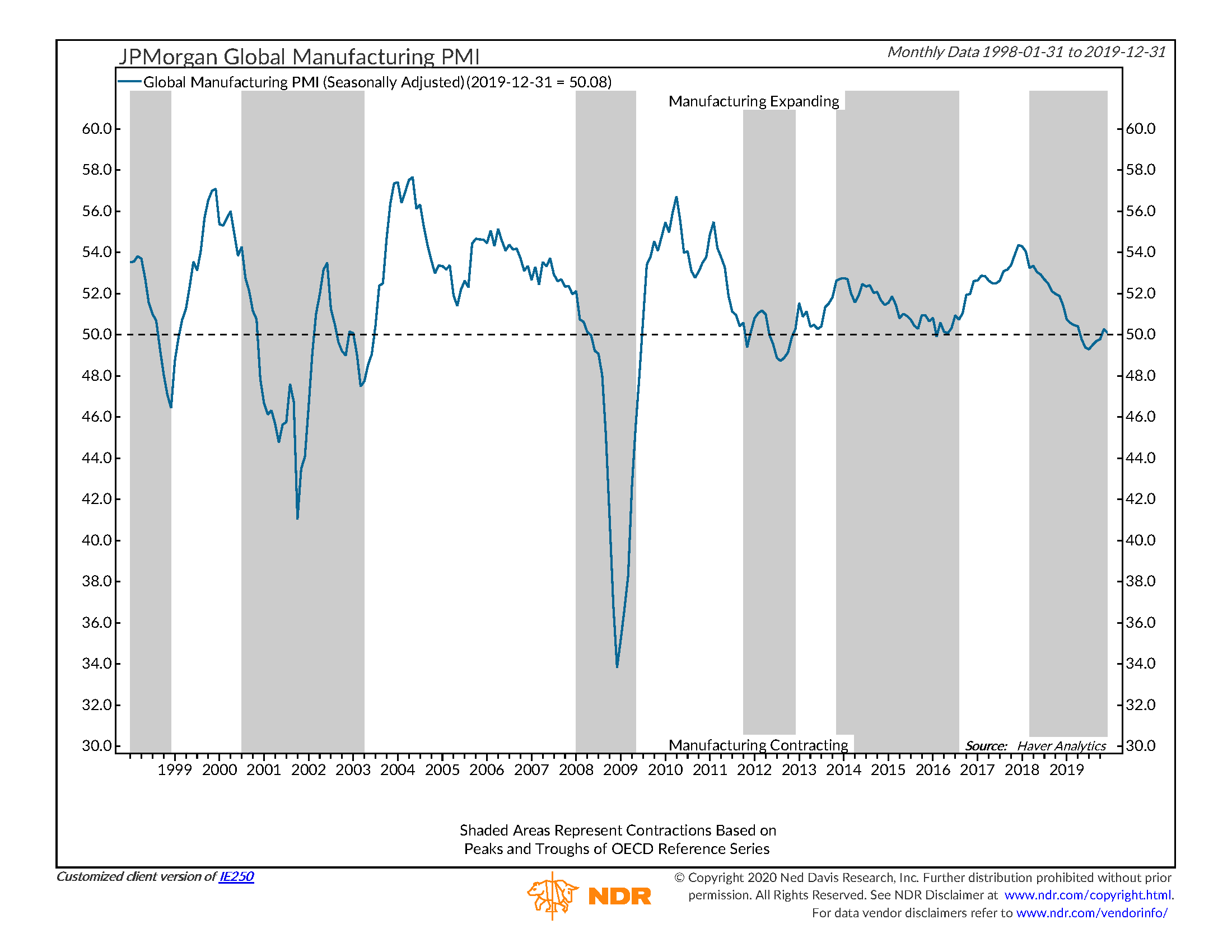 Of course, manufacturing is a smaller piece of the global economy than services is, it is however the segment that is typically the most accurate in identifying inflection points for the economy. Although the most recent reading from the end of December did show a modest decline, with particular weakness in the U.S., manufacturing did remain above the contraction zone, and the component that measures new goods orders moved to its strongest reading in a year. But also, the percentage of countries with higher new orders relative to inventories increased to 69%, the highest level in over a year. One additional note of interest is that the PMI indexes are showing greater strength in emerging markets than in developed markets.

While manufacturing PMI is an important measure in determining global economic risk, it is not the only measure we take into consideration. One of the other primary economic risk measurement models that we follow is The Global Recession Probability Model, developed by Ned Davis Research, which has historically been a reliable tool for measuring global strength and weakness. As shown in the chart below, the model moved into the high-risk zone for a global recession in mid-2018, and while recession risk has remained elevated, it has begun to slowly and steadily move toward the neutral risk zone. Some of the factors leading to this stabilization are resilient consumer demand, reduced interest rates by many global Central Banks, and positivity on many trade-related issues. 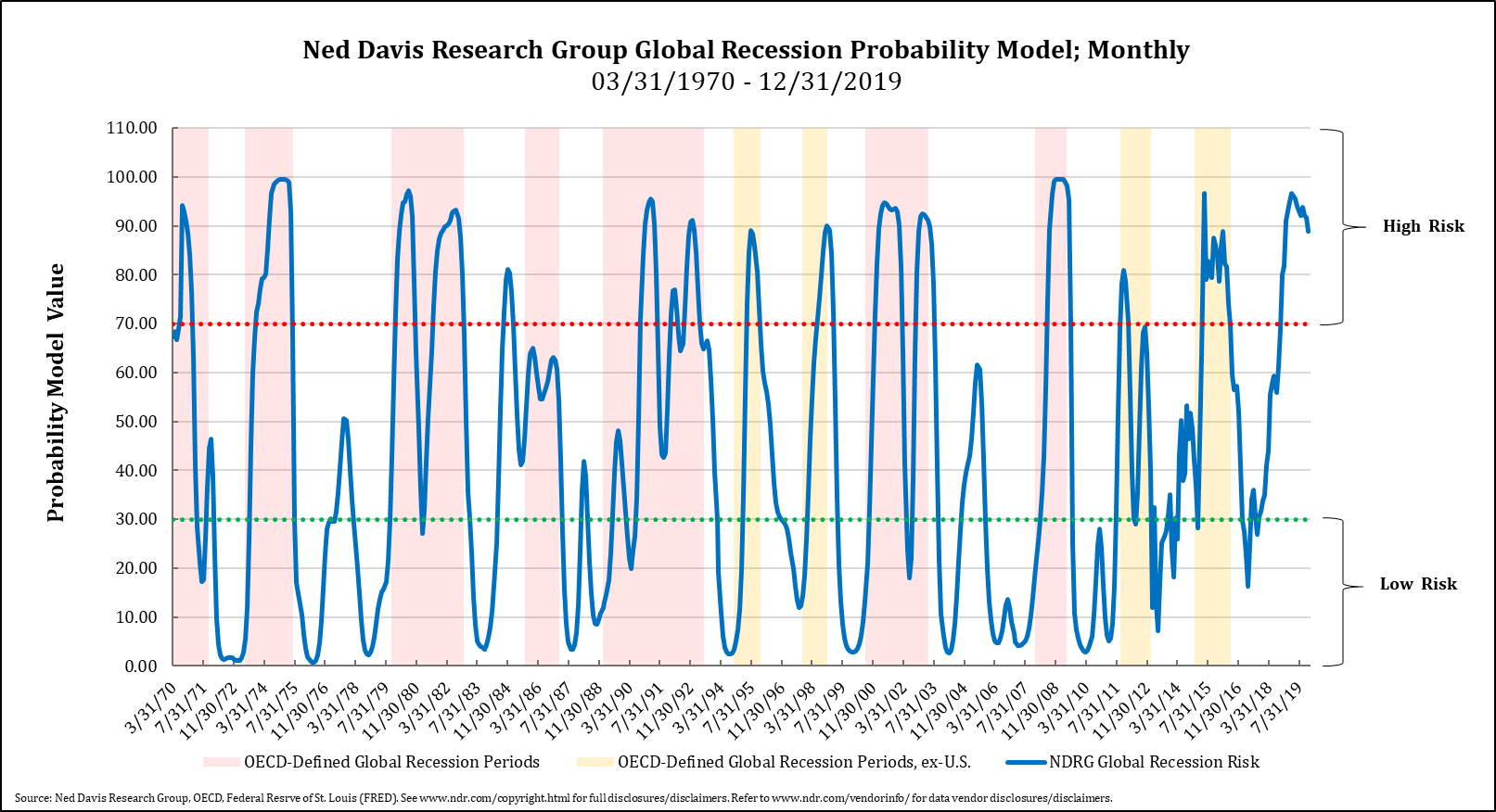 As global economic stability begins to rebound, the U.S. stock market moved to new highs, while foreign developed and emerging markets moved back to the higher end of their trading ranges that they have been in for the past two years. If the global economy continues to strengthen, global markets could break out of the choppy and mostly sideways trading activity they have been experiencing over the past few years and finally move higher.  If that does turn out to be the case, where would the best opportunities be?  While stocks in all regions would likely benefit from continued global strength, it could be most beneficial to foreign stocks, particularly those in emerging markets.

The table below shows the relative valuation of stock markets from around the world, relative to their average valuation. Currently, the U.S. is the 4th most expensive stock market (globally speaking), which is not too surprising, as the U.S. economy has held up better than most other countries over the past couple of years. Yet, if global growth picks up, we could see a stronger rebound in foreign stocks, relative to U.S. stocks.

With the world becoming increasingly globalized, and a significant amount of revenue from larger corporations coming from foreign countries, valuations will likely tend to converge across countries when growth rates become similar. As an example, in the current economic environment, investors are paying a 54% valuation premium for one dollar’s worth of earnings from a U.S.-based utility company, as compared to an overseas utility company. Or, how about a 25% premium for a domestic healthcare company versus a foreign one? U.S. stocks are currently trading at a substantial premium across all sectors, except energy, with premium payments averaging approximately 39%, according to MSCI. While these valuation gaps have persisted for quite some time, they are wider than normal, and could result in potentially positive investment opportunities in the future. This could especially be the case for companies in emerging markets, where valuations are low relative to the U.S. And as noted earlier, economic growth is rebounding much more quickly (and stronger), in emerging markets than in developed markets.

As the backdrop for the financial markets has improved in recent months, our risk measurement models have also become increasingly positive for both stocks and bonds on a global basis. We may continue to see corrections in the 5-15% range, which is far less damaging than the 20-50% declines that are typically experienced during a U.S. recession. 2020 promises to be a year filled with lots of political drama as we move closer to the upcoming elections, along with geopolitical uncertainty over trade and unrest in the Middle East, which will continue to drive short-term volatility. But as long as global economic momentum continues to stabilize and then strengthen, the financial markets could benefit from this headwind now turning into a significant tailwind.

The opinions expressed are current at the time of publication and subject to change without notice. The manager’s views are subject to change at any time based upon market and other conditions, and no forecast can be guaranteed. This material does not take into account any investor’s particular investment objectives, strategies, tax status, or investment horizon. Information contained in the commentary has been obtained from sources that we believe to be reliable, but its accuracy and completeness are not guaranteed. This material should not be considered investment advice or a recommendation of any particular security, strategy or investment product.  Past performance does not guarantee future results.