The Month that Changed Everything

For most of us, the first quarter of 2020 was unlike anything we have ever seen before, on both a personal level, and in the financial markets.  By mid-January the world was made aware of the Coronavirus issue in China, with echoes of prior global health crises such as SARS, Ebola, Mad Cow disease, and Bird Flu, just to name a few.  Stocks dropped in January on concerns that China’s economy would slow down due to the measures they were taking to contain the virus.  Stocks in the U.S. quickly rebounded back to new highs in February, but then fell sharply once an uptick in cases was found outside of China.  We subsequently saw the most rapid bear market decline ever seen in the history of the Dow Jones Industrial Average.  Some of the most important questions I want to attempt to answer in this commentary are:  Why did the market behave differently than in prior global health crisis’? When are we likely to see financial markets recover?  And, what are the opportunities that are arising due to the selloff?

Why Did Financial Markets Behave Differently than in Past Global Financial Crises?

Historically, global health crises have only had modest impact on our financial markets.  Some of that is due to many of the health crises listed above being primarily centered outside of the United States.  However, even the ones that hit us directly, such as the Swine Flu pandemic in 2009, where approximately 60.8 million Americans contracted the disease, an estimated 274,000 were hospitalized, and over 12,400 deaths were reported, according to the Centers for Disease Control.  On a global scale it is estimated that between 151,700 and 575,400 people died from the disease.  Yet this did not have a significant impact on the stock market.  Even if we look all the way back to the 1918 flu pandemic, which affected nearly a third of the world’s population and killed an estimated 675,000 people in the United States and at least 50 million worldwide, the impact on the stock market was a decline of less than 12%.(Source: CDC)  So why have stocks fared worse this time around?  Frankly there is no clear-cut consensus on the primary reason, but the unprecedented temporary closures of large segments of the economy, the global impact, and uncertainly on how long it may take to contain the virus or find a cure, all factor in prominently.  In addition, the lack of an oil production agreement between OPEC members has led to a price war that caused oil to drop below $20 per barrel.  Historically, a price drop such as this would have been great for our economy, but as we are now the worlds largest oil producer, it threatens many jobs and businesses in that industry and thereby has an impact on the economy as a whole.

When Are We Likely to See Financial Markets Recover? – Two Possible Paths

There have been many other sharp declines in the stock market, whether from the stock market crash of 1929, the OPEC oil crisis of the 1970’s, and from recessions or wars, and looking at how markets typically behaved afterwards can show us one possible path that they might follow now. 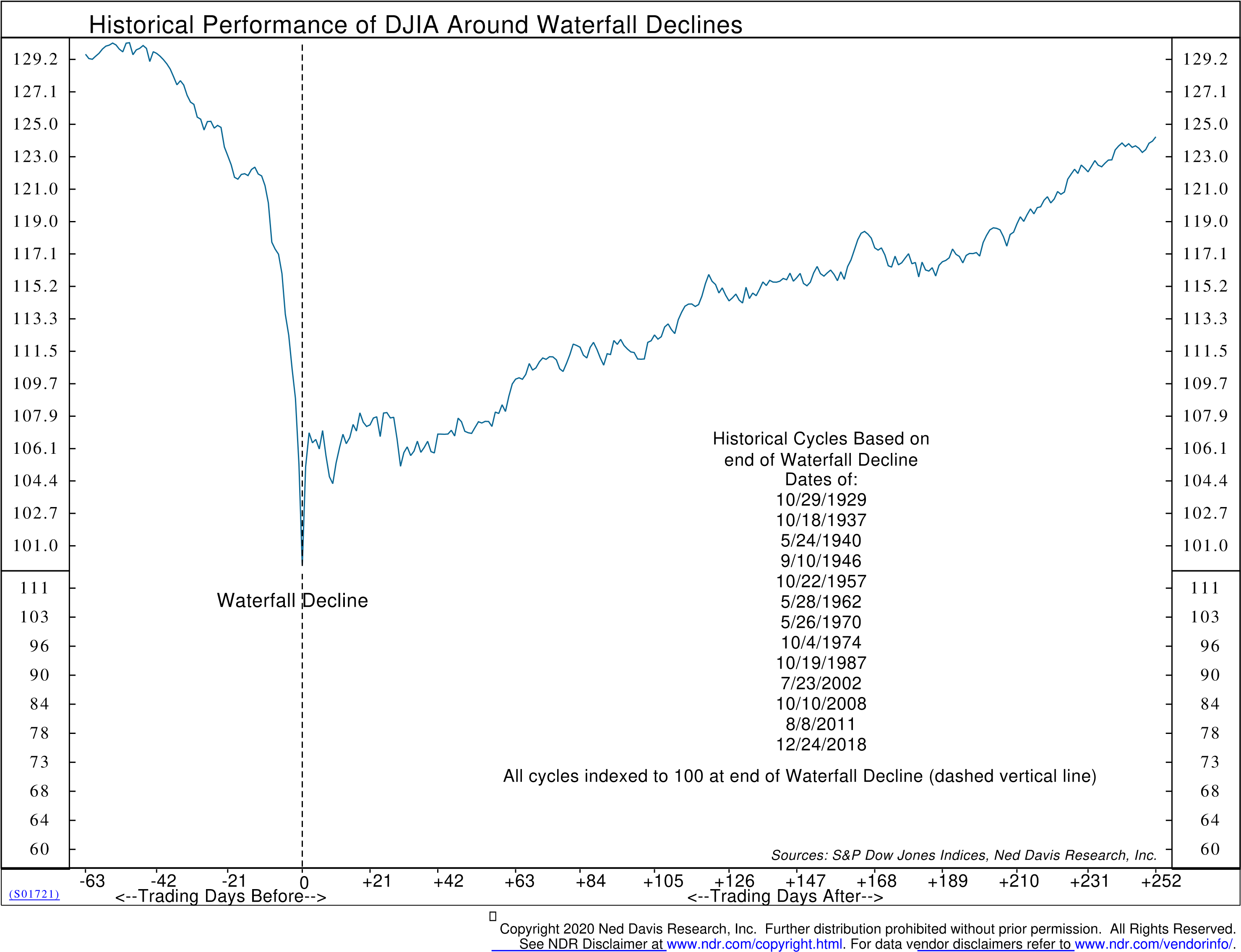 As shown in the chart above, on average, stocks have trended higher over the following twelve months and have typically regained much of the ground that they lost in the market decline.  That is hopeful for the current market environment and shows that typically the event that caused the market to sell off sharply turns out to not be as bad as initially feared, and as the outlook improves, the stock market recovers.  If we can see the economy quickly recover from the sudden shutdown, we believe this is probably the most likely outcome for the current market environment.

The second possible path can best be summed up that a moderate recession has been priced into the stock market, but a severe, or long recession has not.  One way of looking at the potential magnitude for the economic slowdown that we may face can be estimated by looking at unemployment claims and the potential unemployment numbers we may be seeing.  In February, the U.S. unemployment rate was 3.5%, the March unemployment rate moved up to 4.4%, but that data is as of the week of March 12th.  If we take the subsequent two weeks of unemployment claims, which were nearly 10 million, we are already at a projected unemployment rate of 10.5%, which would be higher than during the Great Financial Crisis of 2008-2009, and the highest rate since 1982.  The rapid jump is unprecedented, and it will be critical for the health of the economy that the job losses be reversed quickly.  In the event that the economy cannot recover the jobs quickly, we may see an even more severe recession than is currently projected in the markets.  If that were to happen, stocks would likely have deeper declines ahead, as severe recessions over the past 50 years have typically seen stocks decline by 45% to 55% range.  This is not an insignificant risk, and we are keeping that in mind as we navigate the current environment.

What/Where Are the Opportunities that Are Appearing Due to the Selloff?

When markets drop across all asset classes, it invariably creates good opportunities to pick up some investments at very attractive prices.  Currently, the biggest opportunities that we see are showing up in the bond markets.  We have seen significant declines in recent weeks as not only investments that were economically sensitive were sold, but many investments considered to have above-average safety, such as bonds, also experienced sharp declines as hedge funds and other firms sold these relatively safer assets to increase liquidly or reduce leverage.

There was enough selling in fixed-income assets that the Federal Reserve has stepped in with some multi-trillion-dollar programs to enhance liquidity and stabilize markets, and those programs have been helpful in stabilizing the  markets and this is where we currently see the opportunities on a risk-adjusted basis.  The chart below shows the yield spread on high yield corporate bonds.  We are back at levels seen during the 2002 and 2008 recessions.  In both of the prior cases we saw returns as high as 25-30% in the asset class over the following 18 months after the yield spread began to decline from its high point.  We are seeing similar opportunities in other fixed income areas such as municipal bonds, bank loans and preferred stocks.

Traditional stock market sectors also hold opportunities as every sector has dropped by more than 20% in recent weeks.  We see some good opportunities in technology, healthcare, consumer staples, and in value stocks generally, but note that the risk of a more severe recession makes these areas less attractive on a risk/reward spectrum than many of the fixed income asset classes.  We also have continued finding gold an attractive alternative asset class as it has held up well during the recent volatility and it has historically done well when there is a significant amount of government stimulus and fears of inflation begin to pick up.

In summary, we are navigating through an event that is unprecedented in stock market history, and many governments from around the world have been quick to react not only to the virus, but working to minimize the economic damage by providing programs to help economies and markets to recover quickly.  We expect that we will continue to see above-average volatility, and may see deeper declines if the economic impact of the pandemic is larger than expected.  During this time, we plan to more heavily utilize fixed-income investments due to their lower volatility and more attractive risk/reward profiles, and will look to opportunistically purchase asset classes that have above-average growth potential over the coming years.  We hope that you and your loved ones stay safe during this challenging period, and please contact us if we can be of further assistance.

The opinions expressed are current at the time of publication and subject to change without notice. The manager’s views are subject to change at any time based upon market and other conditions, and no forecast can be guaranteed. This material does not take into account any investor’s particular investment objectives, strategies, tax status, or investment horizon. Information contained in the commentary has been obtained from sources that we believe to be reliable, but its accuracy and completeness are not guaranteed. This material should not be considered investment advice or a recommendation of any particular security, strategy or investment product.  Past performance does not guarantee future results.