The decline that we have seen in oil prices over the past 15 months is one of the largest in recent decades. Many people are shocked to see oil prices drop as much as they have, when just a few years ago it was common to hear talk about “peak oil” – the concept that we were reaching the point of maximum extraction of petroleum products that could subsequently drive the price of oil to $300 per barrel as production declined relative to global demand.  That talk has now been replaced by speculation that we may now have entered an extended period of low oil prices.  Rather than trying to look into the future to guess what may be the primary driver of oil prices, I felt it would be more useful to look backward to periods of similar oil price declines and see what has happened to energy stocks.
Going back over the past 30 years we have seen four cases where oil prices dropped by 50% or more, with one of those cases being associated with the subsequent price drop after the Persian Gulf War of 1990, we will drop that from our analysis.  The three prior cases were as follows: 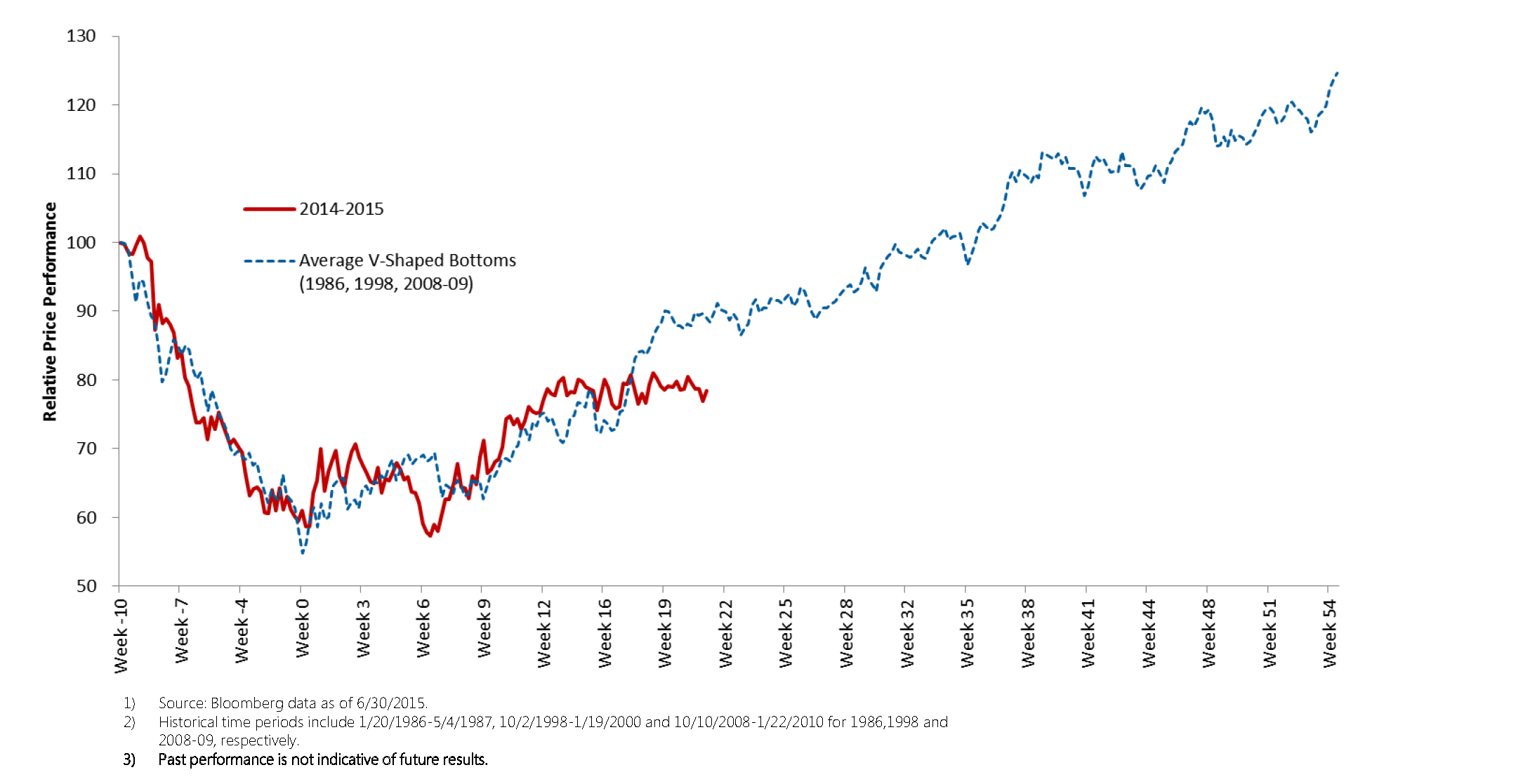 Of particular interest in these three cases is the oil price decline that ended in late 1998.  This decline occurred in a similar period of high valuation for the stock market, and just before the onset of a major market decline (just over one year away).  The peak for the S&P 500 was on March 24th of 2000, yet even as the general stock market was declining, energy stocks continued to move higher, and did not reach their peak for the cycle until May 21st of 2001.During that time they outperformed the S&P 500 index by about 14%.  With the current comparisons of a market that is historically very expensive and one of the longest bull markets in history it provides additional reasons to be positive on the sector.

While history provides us with some positive factors to recommend an above-average allocation to energy over the coming years, it is also important to evaluate the potential factors that could cause this cycle to be different.

One of the first concerns is a longer than expected time frame to get supply and demand back to a more favorable level.  Crude oil production has been rising due to new technologies and investments in unconventional resources. In the United States, domestic oil production has nearly doubled over the last six years and it is pumping about 9.3 million barrels per day (mb/d)³ . Russia reached 10.77 mb/d in October, breaking its post-Soviet record (4) . Canadian, Saudi Arabian and Iraqi oil production and exports have also been increasing over the past few years. October global oil supplies totaled 97 mb/d, up 2 mb/d from a year earlier (5) .

As production and supply has increased, demand has been weakening due to slower-than-expected economic growth in Europe and China. Even though the sharp drop in oil prices has encouraged more usage to about 95 mb/d for now, the demand has been outpaced 2 mb/d by vigorous production. In addition, International Energy Agency (IEA) suggests that global demand growth is expected to slow from a five-year high of 1.8 mb/d in 2015 to 1.2 mb/d in 2016. The estimates indicate that current supply and demand are not likely to come into balance before the third quarter of 2016.

OPEC has served as the global balancer of oil supply since the early 1970’s.  As new technology has allowed countries such as the United States to tap into more extractable unconventional oil supplies, the power wielded by OPEC has begun to diminish. During the past six years OPEC had kept their aggregate production at 30 mb/d, while production from the United States and Canada had increased by 6.3 mb/d. Now producing only 40% of the world’s crude oil, OPEC is concerned about losing market share from their traditional customers and is unwilling to cut production to stabilize the oil market. Similar to the 1986 policy by Saudi Arabia, OPEC decided to continue to produce oil and let the price fall until other countries decided to get in line and help share the pain.  That strategy is causing an estimated loss of $300 billion in revenue this year to Saudi Arabia and its Persian Gulf allies.  How long these oil dependent countries will be able to continue holding a hard line on maintaining their production at the cost of greatly reduced revenue remains to be seen.  However, it is likely to begin having significant impact on the finances of the oil rich countries within the next year or two.

Iran is expected to play a more significant role in the oil export market after reaching a deal with six world powers which limits Iranian nuclear activity in return for the lifting of sanctions.  Based upon the IEA report of October 2015, Iran is expected to see their oil production move from the current 2.9 mb/d to 3.6 mb/d. This will add downward pressure to oil prices and increase competition among oil exporters. How quickly Iran will be able to increase their output by 700,000 barrels of oil per day is the subject of much debate, but it will be one more factor that weighs on the ability of oil market to get back into a more normal supply/demand balance.

Whenever there has been a significant decline for oil there have been numerous reasons given as to why prices were expected to remain low, and this cycle is no different.  While some of the factors we are seeing in this cycle are unique, it probably does not differ too significantly from prior cases which have seen significant upside potential once supply and demand begin to move back into balance.  From a historical perspective, the risk/reward potential in the energy sector is quite attractive over the next 2-3 years if we do not experience a global recession.  Though timing the perfect bottom is near impossible, we are likely to be overweighting investments that will benefit from rising energy prices on a regular basis in the coming quarters and years.

We hope that you and your family have an enjoyable Thanksgiving.